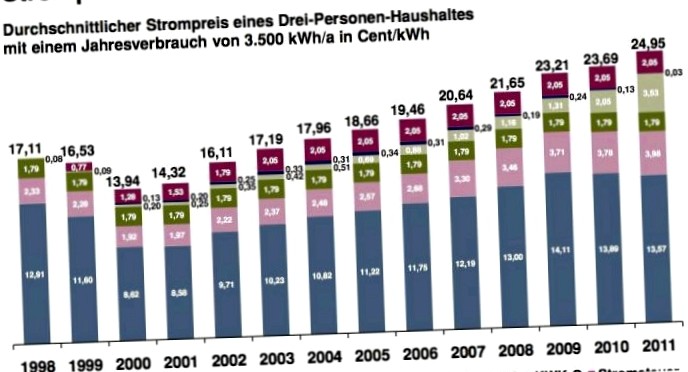 The energy and climate newsreel: about electricity prices, excesses and luxurious demands in japan

The future of solar power payments is still up in the air. The federal government hopes that there is still before the summer break an agreement with the lander.

The matter is currently being negotiated in the mediation committee between the bundesrat and the bundestag. The latter has already passed a law with drastic reductions that will come into force in the short term, but the state chamber has initially vetoed it. Last week, the joint committee met for the first time on this ie and has set up several working groups. June they want to meet again.

As the mitteldeutscher rundfunk reports, an agreement could then actually be possible. Accordingly, the federal environment ministry has agreed with the states of saxony, saxony-anhalt and thuringia that the reductions for smaller plants up to 40 kilowatts should be significantly less drastic than previously planned. This rough class is mainly of interest for rooftop installations on residential, commercial or even public buildings. Nothing is known yet about the development of the other points of contention, such as the compulsory self-consumption.

The debate about the expansion of photovoltaics is accompanied by a loud propaganda stunt, with which the rising electricity prices are complained about with a very transparent intention. All of a sudden, all kinds of managers, FDP and CDU/CSU politicians, and even journalists who otherwise care very little about the misery of those affected by hartz IV, discover that the electricity for many poorer households is barely affordable.

But is this really to be blamed on the renewables? As reported, a small study published last week by the forum for the ecological-social market economy and the institute for future energy systems showed that the costs of the EEG levy are borne primarily by private consumers and small and medium-sized enterprises. For the industry, however, there are numerous exceptions and favors. This is despite the fact that private consumers already pay a significantly higher price for electricity than industrial customers and that the argument of international competitiveness, which is used to justify the privileged treatment, is only valid for a minority of the companies involved.

The two graphs from the german association of energy and water industries (BDEW) demonstrate this clearly. In 2011, a residential customer paid an average of 24.95 cents per kilowatt hour (ct/kwh) and a commercial customer, unless largely exempt from the EEG surcharge, paid 13.58 ct/kwh. The breakdown of the electricity price in the two charts also shows that the EEG surcharge is only one of many cost drivers for private households. For example, value-added tax is paid on the full amount of this electricity. So if german environment minister peter altmaier really wants to help poorer households, perhaps he should talk not to the welfare associations but to his cabinet colleague in the ministry of finance.

At the moment, consumers pay the 19 percent VAT not only on the actual electricity price, but also on the concession fee, the energy tax and also on the EEG levy. Why a tax is levied on a tax does not necessarily make sense. Maybe this would be a first approach to relieve the consumers. But if, for reasons of systematics, this meta-tax is to be left at that, there is still the possibility of taxing electricity only at the reduced rate of seven percent. After all, it is also a kind of "food". That would make the kilowatt hour about two cents cheaper at 2011 prices. 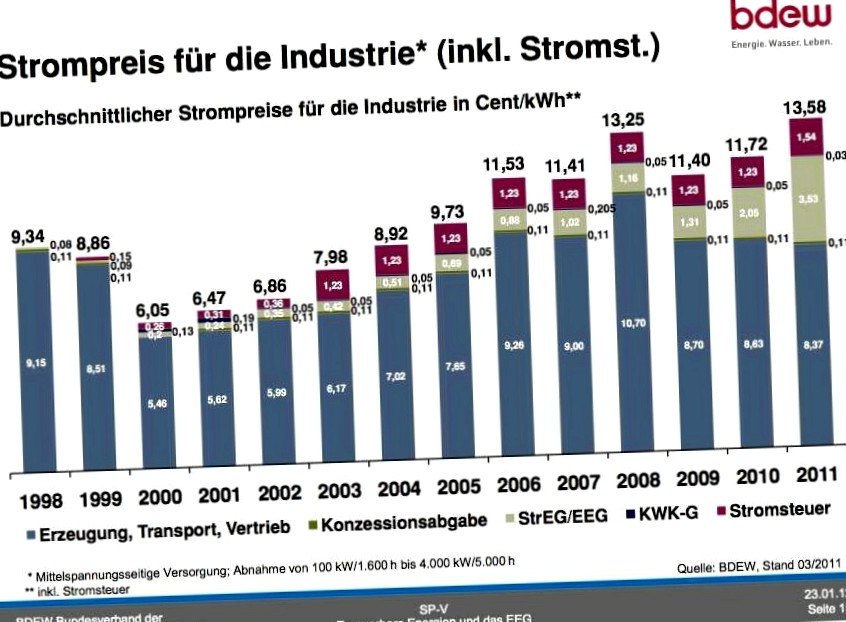 After all, both the federal minister of the environment and all the other politicians in the governing coalition and representatives of the interests of the big power companies are well aware of the dubious basis on which the EEG surcharge is calculated. It is calculated from the difference between the remuneration and the respective average market price achieved in leipzig. However, since the solar power in particular is generated at the times of the highest consumption and thus ensures that the particularly expensive peak load power plants hardly have to be started, the price of the power supply falls considerably during the day, as can be seen on the page of the power supply company. The graphic below, which shows a screenshot from the 19. June 2012 shows the price development since last summer.

The problem is that solar power, and to some extent also wind power, makes electricity cheaper and thus gives an advantage to large consumers. At the same time, however, the price reduction will lead to an increase in the EEG levy, which is determined by the difference between the remuneration and the price of the power plant. The success of the energy turnaround therefore seems to be driving up its costs, but only because of the special way in which the EEG surcharge is calculated. Of course, these could also be calculated in a different way, for example as the difference between the remuneration and an average price estimated in advance for electricity from conventional power plants, including peak load. Thus, the increase in the levy would be significantly weakened. 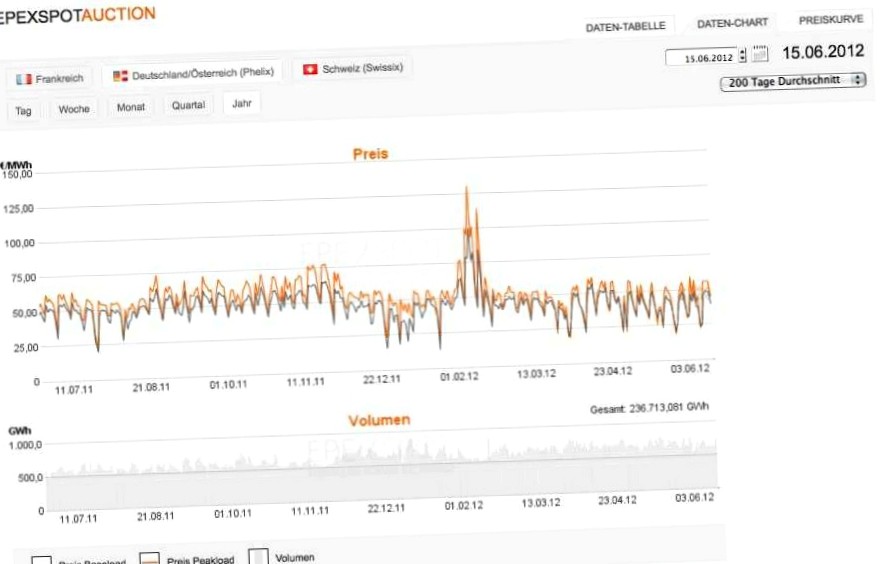 As you can clearly see, since november 2011, the price of electricity traded on the stock exchange has decreased. Only on a few days in early february was electricity extremely expensive. The reason was the rough demand for electricity in france, which was partly covered by german exports. During the cold snap, the consumption of electricity heating systems in neighboring countries skyrocketed. Image: leipzig power exchange

Meanwhile, the working group on energy balances (AGEB) has presented figures for the first quarter of 2012. Power consumption is largely constant compared to last year.

It is noteworthy that germany continues to be a net exporter of electricity. In the first three months of 2012, 8.224 billion kilowatt hours of electricity were exported. If the tide does not turn dramatically in the course of the year, germany’s net exports in 2012 will be about the same as in 2010, the last year when all nuclear power plants were running all year round (with the exception of vattenfall’s breakdown reactors, which, as is well known, had already been shut down for several years). In 2010, germany exported about 17 billion kwh net.

This proves that all fears, real or pretended, that the nuclear phase-out would make the country dependent on electricity imports, are unfounded. The main reason for the german surplus was the sharp increase in electricity production from renewable energy sources. This increased by 22.1 percent from 27.1 to 33.1 billion kwh. The strongest increase was in photovoltaics at 43.2 percent, while wind power rose by 35.3 percent and accounted for around half of the total in the first three months "clean" electricity from.

And last but not least the good news of the week. In japan, two nuclear power plants are currently being restarted after the country has been without nuclear power for about six weeks (japan nuclear-free), but at the same time extraordinarily coarse feed-in tariffs for wind and solar power have been set. According to a report by the reuters news agency, the 1. July similar regulations come into force as in germany. Power companies must purchase electricity from wind, solar and geothermal plants at fixed rates, usually guaranteed for 20 years. Solar power is expected to cost 42 yen (about 42 euro cents at the current exchange rate) per kwh, which is a little more than twice what it costs in this country. For wind power, there is 23.1 yen (about 23.1 cents), more than twice as much as for german wind power. Electricity prices will rise by an average of 10 percent.

The japanese government hopes to have 2.5 gigawatts of new power installed by march, which is still very little compared to german experience, given the extremely luxurious benefits. In germany, approximately 7.5 GW of solar capacity has been installed in each of the last two years. Wind power capacity in germany has been growing regularly by 1.5 to 2 GW per year for a number of years.

If there are no excessive bureaucratic obstacles at the local or regional level, solar and wind power should also boom in japan. In view of the high remuneration, one must even fear that the market could overheat very quickly. Even without the rebate scheme, 1.4 GW of solar capacity was installed in japan last year, and the figures from the japan photovoltaic association show a strong positive trend in additions. But it will certainly do the global solar industry good that a new boom market is growing up in japan, after which the demand programs are being cut everywhere in europe.