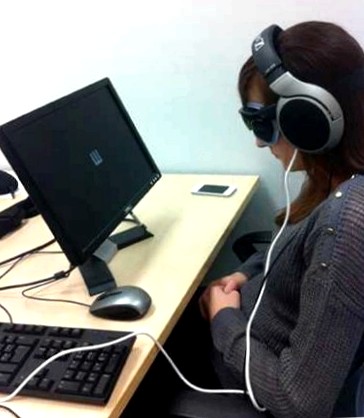 Subject blindfolded and the "voice"-device

British and dutch scientists have now tested a technique, as they report in the journal frontier, with which the brain can convert sounds into images. This is to give blind or visually impaired people the opportunity to get a picture of their surroundings. "The voice" was developed by dutchman peter meijer in 1992 and transforms images taken by a camera into "soundscapes", sent to headphones at – one per second. A soundscap consists of a scan of the visual scene from left to right, where the vertical axis of the image and its loudness represent the brightness, the pitch. Thus, one perceives a series of snapshots moving from the left ear to the right ear. The scientists carried out some tests with the device. The subjects were first explained the technique, then blindfolded to test how well and quickly they learned to see over the hearing. For example, they were presented with an eye test with the letter E, in which it was a matter of recognizing in which of the four positions (up, down, left, right) the visual sign (optotype) was shown in different roughs.

Even without prior training, the subjects were able to find the correct position almost as often as people with normal vision who were taught the E via a camera image. . However, due to the height of the sound, the E pointing upwards or downwards could be recognized better than the E pointing to the left or right. Or it was a question of recognizing the first letters of colorful words that appeared briefly on colorful backgrounds.

Not surprisingly, people who are musically trained, that is, who have experience in pitch etc. Were able to see more accurately by hearing. Nevertheless, the vision is poor compared to what can be perceived with both eyes and the sense of sight. For scientists, however, the successes of the technique are greater than what can be achieved with the implantation of embryonic stem cells or with retinal prostheses.